At 46, Gabrielle Union Just Showed Off Her Toned Abs In ‘Bring It On’ Halloween Costume 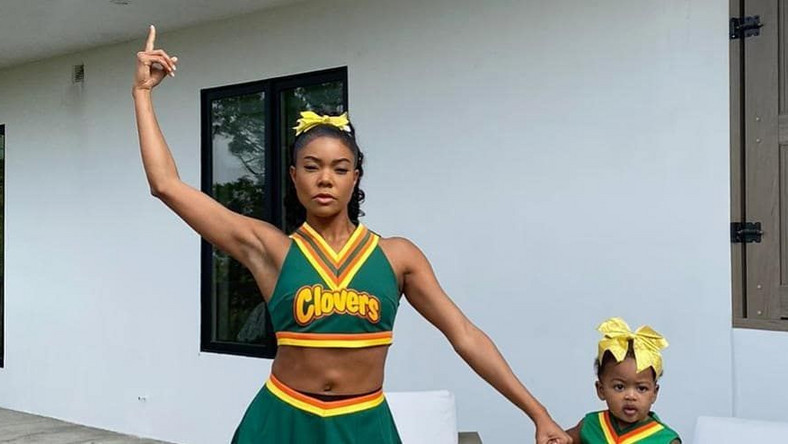 Gabrielle Union has had so many awesome film and TV roles, but her turn as tough-talking cheerleader Isis in Bring It On is iconic. Apparently, the 46-year-old knows itand knows how much people freak over her characterbecause she just dressed up like her for Halloween and it. is. EVERYTHING.

“Brought It. #CaliforniaLove,” Gabrielle captioned a photo of herself and her adorable daughter Kaavia in matching uniforms. While Kaavia looks so freakin’ cute, Gabrielleand her rock-hard abstotally stole the show.

For starters, she played Isis almost 20 years ago, and her Clovers uniform fits her perfectly. And let’s repeat: Her abs are **cheerleader voice** R-I-D-I-C-U-L-O-U-S.

Oh, and Gabrielle’s fans definitely noticed how amazing she looks (because how they could not?). “I mean I truly dont understand how you look the same. Like this could be photoshopped but I know it isnt. You are just incredibly inspiring!!” one person wrote. “You look the same but better. How is it possible?” another said.

Gabrielle has made it pretty clear that she doesnt mess around when it comes to her health. “I have a family history of diabetes, high blood pressure, and high cholesterol, and I know that can lead to an early death. I want to be a vital and energetic part of my family for a long time, not to be big mama in a rocking chair in the TV room, or huffing and puffing just going up stairs. I work out not because I get off on it, but because I want to live!” she previously told Womens Health .

As for what, exactly, she does to look so amazing? Gabrielle said shes big on Pilates. “I’m not a morning person, but I have to work out early because of my schedule,” she said. “The great thing about Pilates is that I can take out my annoyance from waking up early on the machines instead of human beings. It’s for the greater good. My body responds to it, and I’m also more clear.”

She also doesnt neglect her arms. “I love my arms because it’s where I get fast results,” she added. “At my age, if I don’t work out for two weeks, it’s like I’ve never done anything, ever. But my arms come back quickly. I try to maintain my moneymakers.”

Gabrielle is careful about what she eats, too. She told Everyday Health that she follows an “almost vegan diet” and that shes cut out gluten, soy, and dairy from her diet. “It’s actually made a huge difference,” she said. I mean, clearly.

7 common mistakes you probably make in the bathroom

Tales Of A Man's Life

Dare to Be An Original

Security and safety will restrict you in your efforts

How Too Much Routine is Secretly Making Your Life Hard

The Nigerian Beauty Scene And The Many Competitive Brand: Will You Shop Local Or International Brand?

On This Episode Of Toke Moment, Toke Makinwa Answers All Your Questions Given To Her

7 common mistakes you probably make in the bathroom