by Edidem
in Movies
5k 51
0
5.4k
SHARES
9.6k
VIEWS
Share on FacebookShare on Twitterhttps://wa.me/2348033647059 info,246hits@gmail.com
Mahershala Ali, winner of two Oscars, is taking over the role of Blade from Wesley Snipes.
(CNN) — Marvel made a host of super announcements at its panel at Comic-Con International in San Diego on Saturday, but saved arguably the biggest news on the next phase of the Marvel Cinematic Universe for last.
Two-time Oscar winner Mahershala Ali will be joining the Marvel Cinematic Universe as Blade, previously played by Wesley Snipes.
Ali was on hand for the announcement and given a hero’s welcome as he revealed the news by wearing a “Blade” hat.

Mahershala Ali will officially play #Blade in the MCU! 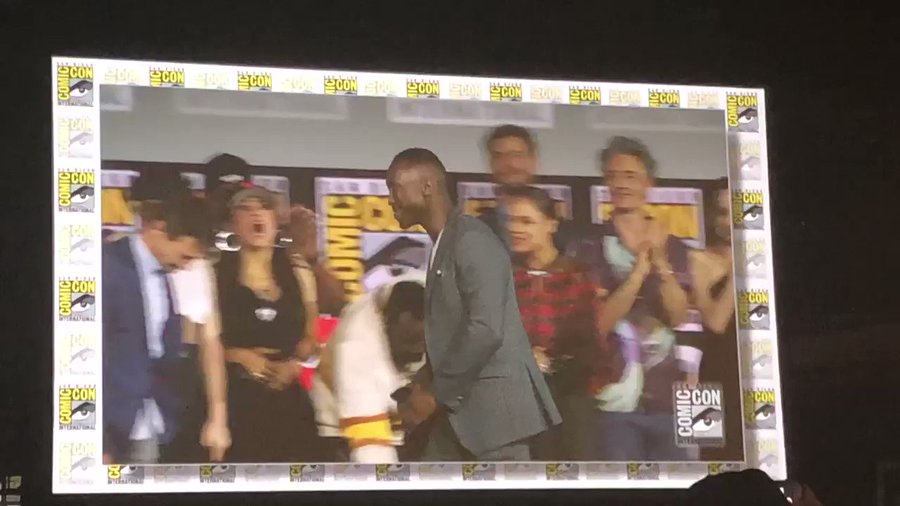 6,118 people are talking about this
Blade is a character in the Marvel universe who is half-human, half-vampire and hunts down the undead. The character also was adapted to the hit movie “Blade” that starred Snipes in 1998. Snipes went on to reprise the role again in 2002 and 2004.
Ali, who has won Academy Awards for his roles in “Green Book” and “Moonlight,” most recently starred in HBO’s latest installment of “True Detective.”

Marvel Studios’ President Kevin Feige also stunned the Comic-Con audience with a list of Phase 4 productions through 2021. For those in the know, Phase 4 describes the latest batch of MCU productions.
First up is “Black Widow,” which is slated for a May 1, 2020, release. It will be the first film in Phase 4. 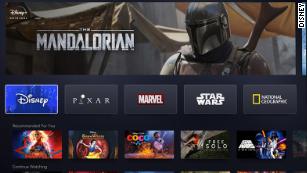 Related Article: 5 things to know about Disney+
After the presentation, star Scarlett Johansson told CNN the new film would teach viewers what her character “is afraid of and what parts of herself she’s afraid of.”
“You really see her in like, a pretty broken down place, and she kind of has to like build herself back up and pull all the pieces together in this film,” Johansson said. “It gets kind of gnarly but good gnarly.”
Asked if the film presents any new physical challenges than the ones she’s faced in previous Marvel films, Johansson joked, “Yeah because I’m older now so everything hurts. It’s harder.”
Johansson has played the role since 2010’s “Iron Man 2.” 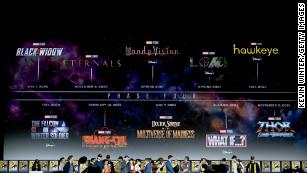 The Marvel Cinematic Universe Phase Four is announced during 2019 Comic-Con International on July 20, 2019 in San Diego, California. (Photo by Kevin Winter/Getty Images)
With the new streaming platform Disney+ coming this November, Feige also announced a new, original series, “The Falcon and The Winter Soldier,” which will be released in fall 2020. The series takes place after the events of “Avengers: Endgame” and pairs up two of MCU’s most popular heroes: Sam Wilson aka The Falcon and Bucky Barnes aka The Winter Soldier, according to a press release from Marvel.
“The Eternals” comes next on November 6, 2020, and it will be directed by Chloé Zhao. The film will star Angelina Jolie, Richard Madden, Kumail Nanjiani, Lauren Ridloff, Brian Tyree Henry, Salma Hayek, Lia McHugh and Don Lee. 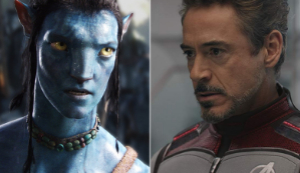 Related Article: ‘Avengers: Endgame’ passes ‘Avatar’ to become the highest-grossing film ever
Feige told CNN after the panel that “The Eternals” is this phase’s “big ensemble” film — much like how “Guardians of the Galaxy” was in Phase 2.
Feige said 2021 will kick off with “Shang-Chi and the Legend of the Ten Rings.” The film, to be released in February 2021, will star Simu Liu in the title role of Shang-Chi along with Awkwafina and Tony Leung.
Spring 2021 will see the release of “Wandavision” on Disney+, Feige said. Paul Bettany will reprise his role as Vision in the original series and Elizabeth Olsen returns to her role as Scarlet Witch.
“Wandavision” will play into the storyline of the film “Doctor Strange in the Multiverse of Madness,” Feige said. Benedict Cumberbatch will return as Doctor Strange on May 7, 2021. The film will be directed by Scott Derrickson.
‘Avengers: Endgame’ shatters box office records 01:19
Marvel will also get its first animated series in summer 2021 with “What If …?” The series will also air on Disney+ and will feature stories that present alternate realities in the Marvel universe, according to the release from the studio.
Another popular Marvel hero will get his own show on Disney+ as well, Jeremy Renner reclaims his role in the series “Hawkeye.” The series is set for a fall 2021 release.
Last on the slate is “Thor: Love and Thunder,” which will hit theaters November 5, 2021, and will star Natalie Portman as the Mighty Thor, the goddess of Thunder.

Tags: Mahershala AliMahershala Ali will be the next 'Blade' as Marvel rolls out its new slate of movies
Previous Post