Hangover Anxiety: Why You Get ‘Hangxiety’ After a Night of Drinking

For some drinkers, hangxiety—that’s hangover anxiety, for the uninitiated—is almost as reliable as the pounding headache and queasy stomach. It’s the feeling of dread that follows a night of heavy imbibing. That chill, fun vibe that accompanies having a few (or a bunch) of drinks is gone. Now you just feel anxious. Your mind races, maybe your palms sweat, maybe you get a stomachache. Maybe you’re replaying everything you said last night and frantically scrolling through your texts to make sure you didn’t send a message you super wish you hadn’t. Or maybe you just feel really worried and full of dread, even if you can’t think of a specific thing to be worried about.

For some people, these doubts and worries are fleeting—run-of-the-mill nerves from letting their guard down after a few too many drinks the night before. But for others, the anxiety is overwhelming, and it’s not just regret from drinking too much or your mind’s effort to piece together a hazy night. The overwhelming feeling of worry and anxiety after drinking too much is an experience common enough that Reddit has devoted threads to the term: “hangxiety.”

It turns out that hangxiety might in fact be a thing that has both physiological and psychological explanations. One thing to keep in mind: Alcohol affects various neurotransmitter systems in the brain and trying to nail down how it affects any one is difficult because they interact with one another. That said, we did talk to experts who helped us understand the big picture.

The physiological factors behind hangover anxiety

Although not everyone experiences hangover anxiety—some people just feel achy or have an upset stomach—it’s a relatively common symptom of a hangover. Michael Bogenschutz, M.D., professor in the Department of Psychiatry at NYU Grossman School of Medicine, explains that the symptoms you experience after a night of heavy drinking tend to be milder versions of what clinical alcohol withdrawal looks like. So, the morning after a night of hard partying, you may feel sick to your stomach, nauseated, irritable, and anxious. Someone who drinks heavily often—and then stopped suddenly—would experience more severe versions of those symptoms—vomiting, diarrhea, maybe even a panic attack. In other words, hangover anxiety can be one of these subclinical (not severe enough to be diagnosed) symptoms of withdrawal. George F. Koob, Ph.D., director of the National Institute on Alcohol Abuse and Alcoholism (NIAAA) agrees: “I think of a hangover as, more or less, a mini-withdrawal from alcohol, and anxiety is one of the components,” he tells SELF.

When you drink alcohol, dopamine neurons in areas of the brain associated with reward start firing more and more, explains Aparna Iyer, M.D., a psychiatrist and assistant professor at University of Texas Southwestern Medical Center. The problem is, that dopamine rush is short-lived with alcohol, Dr. Iyer says. That’s part of why your mood and anxiety levels might be impacted for the worse later on.

Alcohol also interrupts the activity of other neurotransmitters, including serotonin and endorphins, which can affect your mood, Dr. Iver explains. The feelings that you have after you drink alcohol, or even the day after, can result in a whole range of feelings and moods and anxiety symptoms,” she says. “It can range from panic to feeling depressed to feeling impulsive to feeling agitated and irritable.”

Alcohol actually has effects on multiple neurological pathways. But when it comes to hangxiety, perhaps the most significant one is the gamma aminobutyric acid, or GABA, pathway. Alcohol increases GABA activity in the brain. GABA is involved in several brain functions—motor control, memory, anxiety—and it’s also the principal inhibitory neurotransmitter, says David Kareken, Ph.D., a neuropsychologist at Indiana University Health. A number of medications used to treat anxiety, including benzodiazepines, also target GABA. Here’s how and why alcohol’s relationship to GABA activity is so important to understanding hangxiety.

Alcohol is “basically primarily a sedative,” Dr. Bogenschutz tells SELF. He explains that alcohol activates the brain’s inhibitory system (that’s that GABA activity) as it simultaneously attenuates the brain’s primary stimulatory system (the glutamatergic system). What you get when the brain’s inhibitory system is working overtime and the stimulatory system is slowed down, is that delightfully relaxed feeling that sets in after a couple of drinks. The thing is that if you’re drinking heavily for a long period of time (this can include just one long night of drinking btw), the brain tries to adapt to these changes by downregulating the inhibitory system and upregulating the stimulatory system; this is just our very smart brain’s way of maintaining homeostasis. Here’s the rub: When you stop drinking you’re left with a brain that’s been adapting to alcohol’s sedative effects by dialing down the inhibitory system and dialing up the excitability system. What you experience bodily when this happens is jitteriness, irritability, and anxiety. In other words, cue the hangxiety.

Alcohol’s effect on the GABA system is “one reason why alcohol intoxication can be perceived as relaxing,” says Dr. Kareken. The problem is that once you stop drinking, that influx of GABA goes away, taking with it the feelings of calm and relaxation. Particularly if you’re someone who relies on alcohol’s calming effects to feel OK, the absence of that calm can be anxiety provoking. 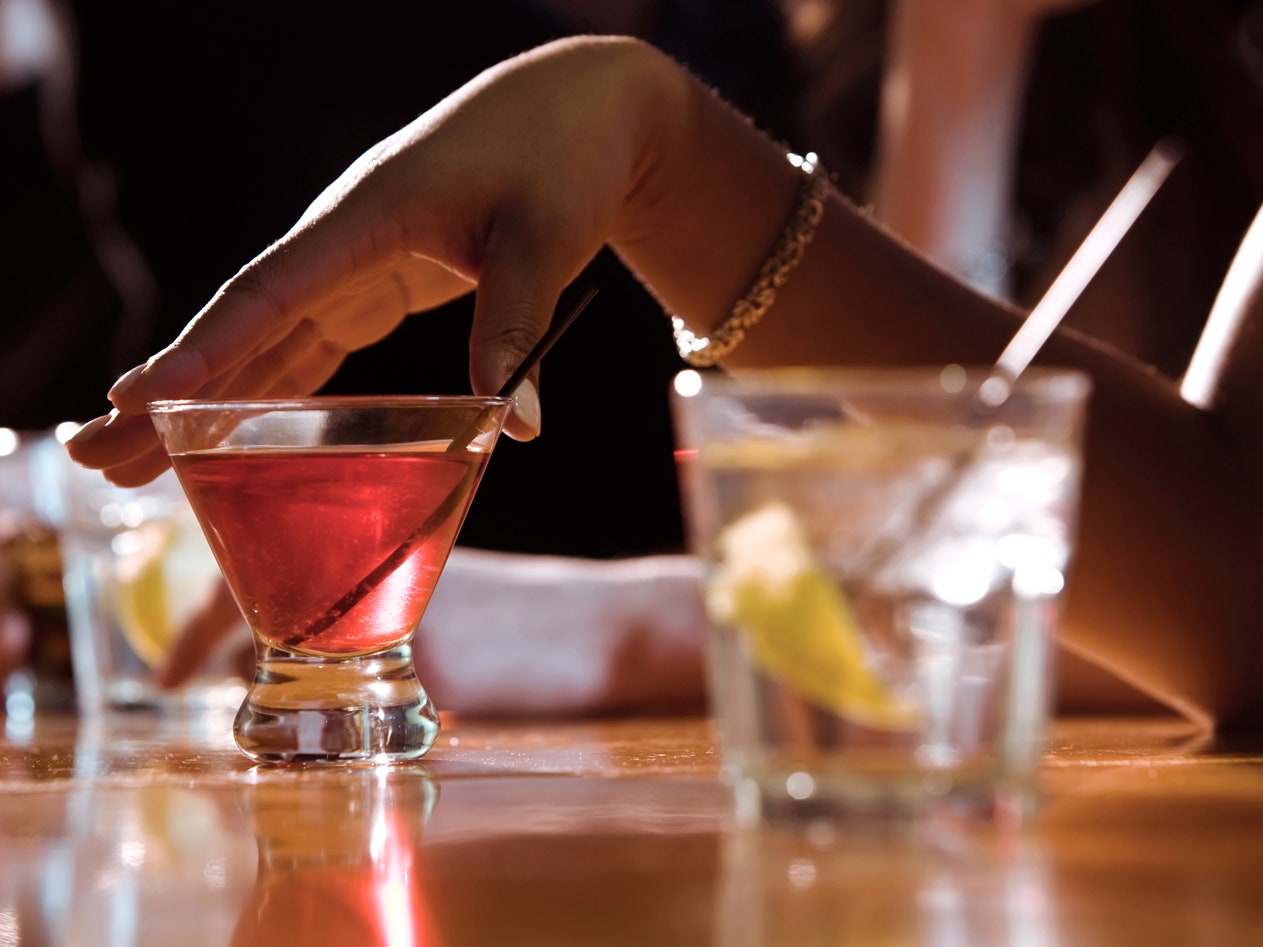 The link between hangxiety and anxiety

Of course, just about anyone can feel anxious after a night of drinking. After all, alcohol makes you feel less inhibited which can lead you to do things you otherwise might not, which can lead you to wake up the next day and start to piece together hazy memories of texting your ex and demanding a selfie with your Lyft driver. But that kind of hangover anxiety is different than what people who already experience anxiety may end up feeling. If you are already prone to anxiety, it’s even worse, sometimes lasting all day and disrupting your ability to function.

Hangxiety is more prevalent for people who are prone to anxiety, especially those who use alcohol as a social lubricant to quell their nerves.

Now look, having a drink when you’re feeling a little wound up or tense is a time-honored way to chill out, but the thing is that the relaxation you get from that delicious cocktail that goes down so smooth is actually pretty temporary, particularly for people who are already anxious in general. What’s more, those temporary calm vibes will likely be interrupted by an anxiety rebound. “People who already have a pre-existing anxiety disorder, even if it’s a small one and kind of underlying everything, whatever they have quieted by drinking the alcohol, that can come back full force or even worse,” Dr. Iyer says.

If you get intense hangxiety frequently, it could be an indicator of a bigger problem. A recent, small study found that highly shy people (the researchers posited that extreme shyness could be a subclinical manifestation of social anxiety disorder) experienced decreased anxiety when drinking, only to then experience elevated anxiety the next day. The researchers concluded that the relief from shyness and anxiety followed by acute anxiety after drinking could mean that highly shy people may be at increased risk of developing alcohol use disorder (AUD), in part because they might be more likely to self-medicate with alcohol.

When hangxiety could indicate a problem

The DSM-5 lists 11 criteria that could lead to a diagnosis of AUD, defined by the NIAAA as “problem drinking that becomes severe.” One of those is continuing to drink even though it made you feel depressed or anxious. According to the DSM-5, AUD can be classified as mild, moderate, or severe depending on how many symptoms you’ve checked off.

A red flag for someone who may be wondering whether or not they have an alcohol use disorder, Koob says, is if they self-medicate anxiety with more alcohol. “[People] who drink and then get anxious, and then start using the anxiety as an excuse for drinking…you’re beginning to get in trouble in my view,” Koob says.

“If you have enough alcohol-induced anxiety that it affects your functioning, and you continue to drink despite knowledge of this effect, then it does become a basis for being diagnosed with alcohol use disorder,” Dr. Naqvi explains.

How to deal when hangxiety strikes

If you’re experiencing alcohol-induced anxiety due to withdrawal from alcohol (like if you’ve recently stopped drinking after drinking heavily often) then it’s wise to check in with a medical professional. They might suggest medication like a sedative to help with this temporary surge in anxiety and may be able to suggest other resources for recovering from AUD.

Even if you don’t have an alcohol use disorder, you can still experience hangxiety after a night of heavy drinking. If you wake up feeling gripped by anxiety, keep in mind that it might be because of the way your body and brain are processing the alcohol.

Deep breathing, mindful meditation, and exercise can all help you to relax and reduce symptoms of anxiety. If it’s something that persists for days, or happens even when you cut back on drinking, then visit a mental health professional. After all, alcohol has become so ingrained in our culture, from boozy brunches to company happy hours to late night bar crawls. If your good time turns into a nightmare the next morning, it might be time to cut back on the booze—and make your mental health a priority.

Tags: Hangover Anxiety: Why You Get 'Hangxiety' After a Night of Drinking
Previous Post

How To Apply for the CBN Collateral free loan